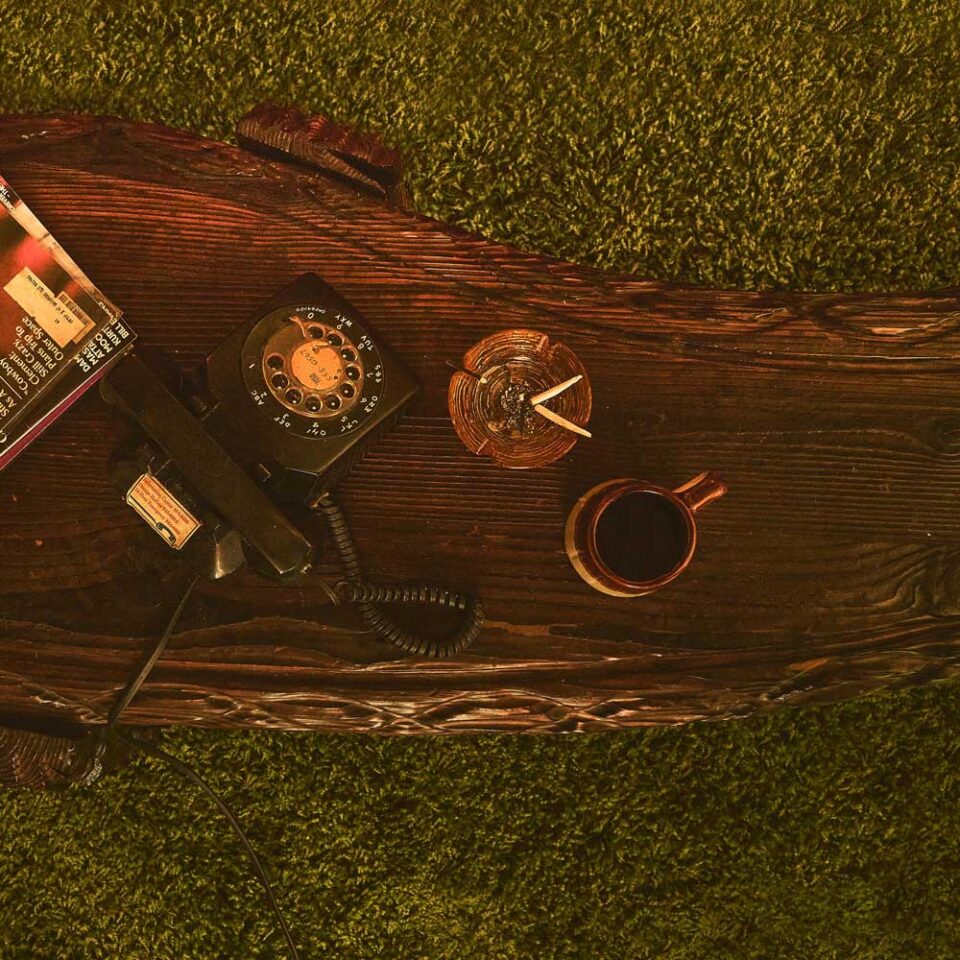 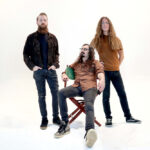 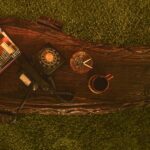 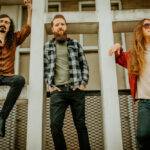 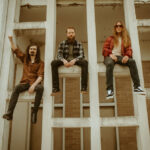 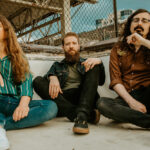 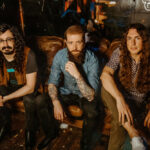 Photos 1 and 2 by Michael Kartaltepe. Photos 3-6 by Destiny Freeman.

When it comes to American music history, all roads lead to Memphis: blues, folk, hillbilly, country. And, by way of elegant balance, all roads lead from Memphis as well: soul, jazz, funk, groove, all the wide, wild strains of “American rock music” – which itself is, as the Dirty Streets’ Justin Toland points out, essentially “world folk music” at this point, having circled the globe and brought itself all back home via the British Invasion, revivalist blues and roots rock, and other pathways.

Bringing us to soul-groove outfit Dirty Streets: Justin Toland (guitar/vocals), Thomas Storz (bass), and Andrew Denham (drums), a trio of musicians who, much like the music they love and play, arrived in Bluff City via points elsewhere, with origins and detours in Texas, Mississippi, Tennessee, and Louisiana.

In late 2019 the band headed into Sam Phillip’s Recording to record the trio’s new album, “Who’s Gonna Love You,” with the Grammy-award winning Matt Ross-Spang (Jason Isbell, Margo Price, John Prine) in the producer’s chair and the band immediately felt the connection, “Matt Ross-Spang is like nobody I’ve ever worked with,” recalls Justin. “Bringing the songs into the studio, he really listened and sat with them. Most of the time he would be laying on the floor with his eyes closed, or hunched in the corner on a chair, just fully open. He was really into us performing them in the room while he just concentrated and soaked it all in before making any swift judgements.”

Justin continues, “There is a knack some people have for sensing a feeling in one bone of a song and building a whole skeleton. Matt is one of those people. He works more like an artist than a producer, shaping sounds and guiding without effort. It was just such a natural relationship between us that I felt like he was in the band the entire time we were recording. Some of the songs took an entirely different direction from the original concepts we had, but we were able to trust his insights, because they seemed to have an essence of purity and true creativity.”

Writing the album went quickly as well using forced time off of the road and life experiences to carve out most of the material. Says Justin, “Our first single, ‘Alright,’ originally came out of the pressures of everyday life. Working, deadlines, disasters and all the other things you have to fight through. Into the pandemic it seemed to become more of an anthem for the pressure that we feel every day. This all happens while telling ourselves that we are making it just fine. In the end, that’s an attitude I try to stick with. I’m not in denial about what’s going down, but I just think of hardships as a means to grow and learn. The song is sort of a one-two punch against the world falling apart around you. I wanted to create a picture of tenacity against relentless storms so that I could mirror it in myself.”

While a song like title track ‘Who’s Gonna Love You’ “was born the way a lot of songs are; sitting on the edge of the bed in a hotel on tour just trying to voice what’s inside,” continues Justin. “Sometimes a feeling is so thick in the air that you can almost see it, and at those moments I just try to see the steam settling into my mind. Like sucking in spiritual smoke so I can spit out whatever that thing is. This song was one of those and seemed to capture that longing you feel when you’re away from your loved ones. You always try to communicate your love long distance, but it can be difficult.”

Scan the press on Dirty Streets and you’ll see numerous references to rock, soul, and dirty-blues touchstones like the Faces, Humble Pie, Otis Redding, and CCR. Spin Dirty Streets’ records and you’ll hear all of those echoes for sure, plus others—some jazz timing, some acoustic balladry. But by and large, what you’ll hear is a raw, rowdy blend of Motown, Stax, and rock—the pure American blood-beat moving through the heart of Memphis groove.

Dirty Streets’ bloodlines, metaphorical and real, aren’t difficult to trace. Austin-born Justin Toland found his own musical food early through his father, a classic-rock aficionado who turned his son on to the Stones, Creedence, soul music and the Stax sound. At 17, Toland relocated to Memphis and met Thomas Storz, a native of the city, through mutual friends. In a scene wherein few of their friends cared much for older music, Toland and Storz quickly found common musical ground and began playing groove-grounded rock with a series of temporary drummers.

It was Storz who finally brought on board Andrew Denham, a Shreveport-born drummer and British hard-rock fan who’d recently moved to the city, just down the block from Storz’s own home. Passing by Denham’s house weekly, Storz heard the sounds coming from inside and mentioned Denham to Toland, who at first thought it couldn’t possibly be this easy.

But it was. “We all kind of grew into our music together,” says Denham, who joined up with Storz and Toland officially in 2007. “We’ve been more or less glued to each other since the beginning. None of us have a long history of playing with anyone else, so our styles developed organically, as we played off of each other.”

“In the beginning, I’d bring in songs and give a little more direction [than I do now],” offers Toland. “But by the time we’d been playing together for a few years, it got to where everyone arrived to the writing with their own styles. The involvement of everyone in the band got way more serious, to the point where I’m the primary songwriter, but even so there’s no Dirty Streets songs without Thomas and Andrew. They bring a lot of each song to the table. And when you have that kind of dynamic, the best way to write songs is to do it together. It’s not even ‘you’ writing the song anymore, at that point. The song becomes its own entity, and it grows naturally from what’s happening in the room.”

“We’re always looking for the groove,” says Storz. “That’s what it’s always come back to, from the first times we played together. All of our common influences are pretty similar – soul, Stax, hard rock, and so on. But we also share an improvisational approach inside that structure, I think. That exploratory impulse always made us sound a little different from other bands who played in those styles.”

From the start, precision playing was the band’s goal. When Dirty Streets began demoing, the trio used a basic setup familiar to any bedroom/garage woodshedder: two microphones and a cassette recorder. No tracks, no real separation, just mics on the bass/drums and guitar and vocals live in the room. Without the option to isolate, tweak, or sweeten after the fact, the band became accustomed to running through a take 40 or 50 times as they worked to get it right, all the way through. By the time they began gigging live, that level of discipline had honed Dirty Streets into an instinctual, responsive outfit. Bootleg recordings of their shows in and around Memphis helped to generate buzz, and established Dirty Streets’ rep as a band whose timing was as sharp as their sound was ragged.

Albums followed – Portrait of a Man (2009), Movements (2011), Blades of Grass (2013), White Horse (2015), Distractions (2018), and the live Rough and Tumble (2020), drawn from an in-house performance for the DittyTV streaming music service – all steeped in the raw rock-soul groove that serves as the band’s taproot, the musical core from which all of its explorations still proceed. And within that core, too, is the element that gives their music, the music they love and play, its unique character.

“No matter how hard you try to play something the same way every time, it’s impossible,” says Justin Toland. “So, with the style of music we play, honesty in the delivery is important. Soul, blues, those kinds of music are about the feeling more than anything else. There’s a place for a more dramatic sort of performance, where someone’s acting a part – that speaks to people, too. Like a musical version of theater. But I’m always looking for something to make me feel differently, something that’s honest and direct in what it’s trying to communicate.”

Toland reflects, “Soul and blues music is about testifying. To me, that’s great songwriting. When it’s good, it’s good because it’s true, because it’s authentic.”